Make the world your office 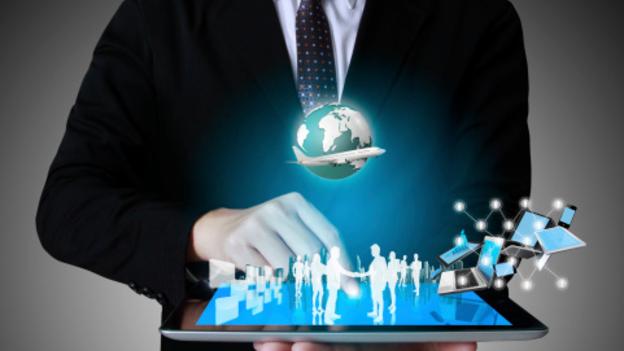 It could be as simple as negotiating an elaborate deal with a businessman — even when you are sitting in an office on the other side of the world. Or it could be as complex as a hospital’s chief cardiologist making final checks before surgery — for a patient lying in an isolated village 500 miles away. Or it could be as personal as making sure you see your children when they get home from school — even though you are in a different time zone.

In the next few years, a technological leap in video communication is about to change the way we interact, work and live our lives.

Software such as Skype – which boasted 299 million users in June 2013 — and Apple’s FaceTime have already transformed personal relationships, meaning that families and friends can stay in touch from anywhere in the world.

But now teleconferencing — and its modern appellation, telepresence — is beginning to change our professional lives, too.

Working remotely
The last few years have already seen a sharp rise in “remote working” — employees working from home. According to a 2012 Ipsos/Reuters poll, around one in five people in the world frequently “telecommute” to work, and nearly 10% work remotely from home every day.

“Not only can it reduce costs, improve efficiency and save on human resources, but video conferencing also makes it easier to convey your idea. When you can communicate with your eyes and face, both sides [of the meeting] feel more confident.”

Teleconferencing no longer requires participants to submit to a fixed system of technical standards. Instead, many systems now utilise what is called BYOD.

“It’s short for ‘Bring Your Own Device,’” says He Liang. “The system recognises that many workers already own tablets, smartphones and laptops with cameras — and integrates them.”

The result is a step change in how we see, and carry out, our jobs.

So it is little surprise that global businesses are expected to spend $3.75bn (£2.3bn) on videoconferencing technology by 2016. Smart 2020, a study commissioned by the Global e-Sustainability Initiative, (a programme launched in 2001 to promote sustainable development in the ICT sector), found that US and UK businesses can save almost $19bn (£11.7bn) as a result of deploying 10,000 telepresence units by 2020.

By cancelling the need for long- and short-haul executive flights between offices, the same study suggested that teleconferencing technology and other virtual tools could reduce global annual greenhouse gas emissions by 15% by the year 2020.

But that is just the start. The next generation of video telepresence systems aims to fit even more seamlessly into our lives — by adding realistic 3D capabilities.

The third dimension
The technology, known as holographic telepresence, is more Star Trek than staff meeting. Instead of a flat screen, a three-dimensional moving image of a user is reproduced at each meeting location.

Currently the effect is not a true hologram. The technology companyMusion, based in the UK, adapts an illusion commonly used in theatres and theme parks known as the Pepper’s ghost effect. An HD projector illuminates a thin, effectively invisible, sheet-like “foil” from a 45-degree angle, creating a 3D image almost indistinguishable from an actual person. The Musion TelePresence system can now transmit full-sized people and objects in real-time “without any significant delay in communication”, the company says.

The system achieved a Guinness World Record in 2012 by helping Indian politician Narendra Modi deliver a 55-minute campaignspeech to audiences in 53 different locations simultaneously. And in the entertainment world, Musion was one of three companies credited for digitally resurrecting rapper Tupac Shakur onstage at the 2012 Coachella festival.

But true holograms might not be far away. Leia Display System is currently working on an alternative technology. The Polish company has built a holographic room, measuring 3m (10ft) by 2.5m (8ft), which uses laser projectors to beam 3D images onto a thin cloud of water vapour — providing not only a giant 3D multi-touch screen, but also the ability to walk through the images and see them from any point of view.

Holographic telepresence like this has obvious potential beyond from the business world. Healthcare is already being revolutionised by telemedicine, allowing patients to be treated remotely, whether in isolated areas or on a distant battlefield.

Still other improvements could be imminent. The Massachusetts Institute of Technology (MIT) in the US is examining how physical surfaces can be manipulated by gestures, with objects being resized, reshaped or moved remotely by people thousands of miles away. This offers the potential for virtual offices, where hundreds or even thousands of people could collaborate on a product without ever touching it.

Researchers at the University of Tokyo are also working on adding haptic feedback (vibrations, for example) to holographic projections by using ultrasound waves. A user can touch and interact with a hologram and receive tactile responses as if the holographic object were real.

In an IBM survey of 3,000 researchers, respondents namedholographic video calls as one of the five technologies they expect to see in place by 2015.

There are obstacles to using these technologies, of course. Not least is the cost of holographic technology: Musion currently rents its system for around $65,000 (£40,000). Live telepresence also needs a fast, direct connection of 10-20 megabytes per second (Mbps), as the recordings are of higher quality.

“But thanks to 4G and LTE networks — and 5G coming soon — bandwidth is no longer a problem,” says Huawei Enterprise’s He Liang.

“[Telepresence] will mean that we don’t have to work in an office,” he explains. “That we don’t have to travel miles to be treated by a doctor. That we can interact with our families from a different country. It will begin to change the world we live in.”

Huawei’s panoramic TPS provides open interfaces to interconnect with the systems of other vendors, thereby protecting the customer’s investment.

Huawei’s panoramic telepresence system is able to save up to 30% TCO for the customer because it requires 25% less bandwidth, 42% less energy, and 26% less physical space.