USB will thankfully never be the same: Reversible Type-C cable and port revealed 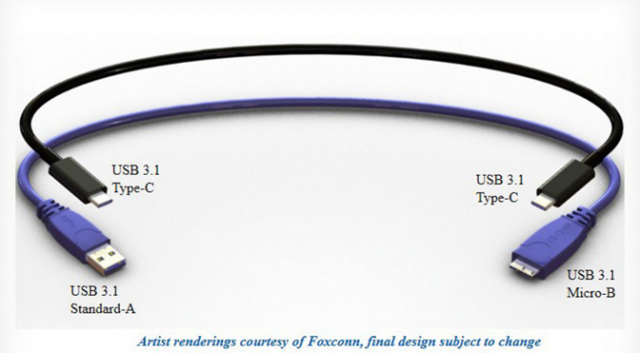 Late last year, word broke that the tech industry’s most heinous crime — the standard USB plug that isn’t actually universal and can only fit into its port one way — would bebrought to justice. Now, thanks to a Foxconn render, we have our first look at the new reversible USB connector and port.

The new plug, USB Type-C, will be fitted to the specifications of USB 3.1 and USB 2.0. Though it will forever quell the instant rage you feel whenever you fail plugging a USB cord into a port, the downside of the new, reversible connector is that it will not be the same shape or size as the other USB cords sitting in your cluttered wires-drawer next to your desk. However, USB plugs and converters are cheap, and eventually the utility of being able to reverse them will help to quickly replace the old cords. OEMs will be allowed to create their own products, so the pricing will likely be more competitive than similar reversible cords, like Apple’s Lightning.

The new Type-C plug is designed with a smaller footprint, will allow for sleeker product designs and scalable power charging, as well as sport transfer speeds up to 10Mbps. Amusingly, if Apple adopts the new Type-C (which it should), that would make the plugs used with the company’s iOS devices reversible on both ends, with Lightning on one side and Type-C on the other.

Foxconn has provided a render of what the cord and port could look like, seen below.

As you can see from the above render, the new proposed port is much smaller than the current port with which we’re all familiar. Though taking the already-tiny USB port and shrinking it down even further isn’t going to make your super-thin iPad Air microscopic, it will actually allow devices to become thinner than they already are.

This long-standing USB fiasco is one of those situations where an issue that seems amazingly simple to solve has taken quite a while to actually fix. The finalized spec is expected to be released sometime in July, just three months away. Next up, hopefully display manufacturers will figure out a way to make screens visible underneath a bright sun.